As yesterday was the first day of spring, and my husband was away on business, I decided to give my kids something to enjoy since they have been miserably sick for a full week.

(M's chest infection has much improved.  E however has a horrific cold-but just a cold at this point.  I don't mean to be pessimistic, but in all likelihood it will become an ear infection since he currently has fluid in his ear.)

Offering Hospitality had a Spring Party Hospitality Challenge.  The best I could do for our "party" was make rainbow pudding!  I had wanted to use vanilla yogurt to keep it healthier and keep the colors true, but as it turns out, this was tons of fun, and we were able to eat it for dessert.  I also do not care for vanilla yogurt-not even if it's pretty. 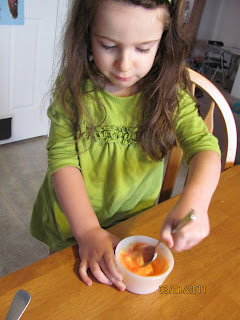 First, I made instant vanilla pudding during nap time.  Once M (but not E) was awake, we turned that pudding (divided into several bowls-but left out indigo) into a rainbow by adding food coloring and mixing well.  I added the color and M mixed.  We did not add food coloring for yellow.


M told me what color to make each time by looking at a recent rainbow project.  Though she loves to mix marker colors to create new colors, she needed some help remembering how to mix colors. 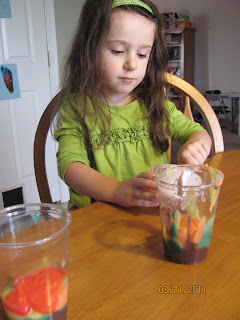 After all the colors were looking so pretty, we created rainbows in clear plastic cups.  I let M decided if she wanted to begin with red or purple, and she started with purple.

I wish I had started with more pudding in each individual bowl.  We were a little shy on making the pudding stretch to the sides, but for a certain four year old, it did not matter one bit!  (And I didn't mind giving the 2 year old a little less.)

I filled E's cup and my own.  M then used the remaining pudding to fill her cup.  She loved this process so much.  If she does indeed have a rainbow birthday party in October, we may revisit this as rainbow yogurt (along with these rainbow party ideas), even if the party is just for our family.

As I expected, M was not able to finish her pudding in one sitting.  E was too sick to want to even try it.  Yep, that is sick! 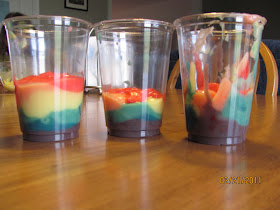 In case you haven't experienced this, explaining that spring has arrived to a 4 year old isn't as easy as it seems since it could still snow!
If you are interested, we have a simple rainbow craft you can check out.  You can also return tomorrow to see our newest name rainbow craft!
Annette W. at 6:00 AM

Sorry...too many spammers to not have the comment moderation in use. Thanks for understanding!